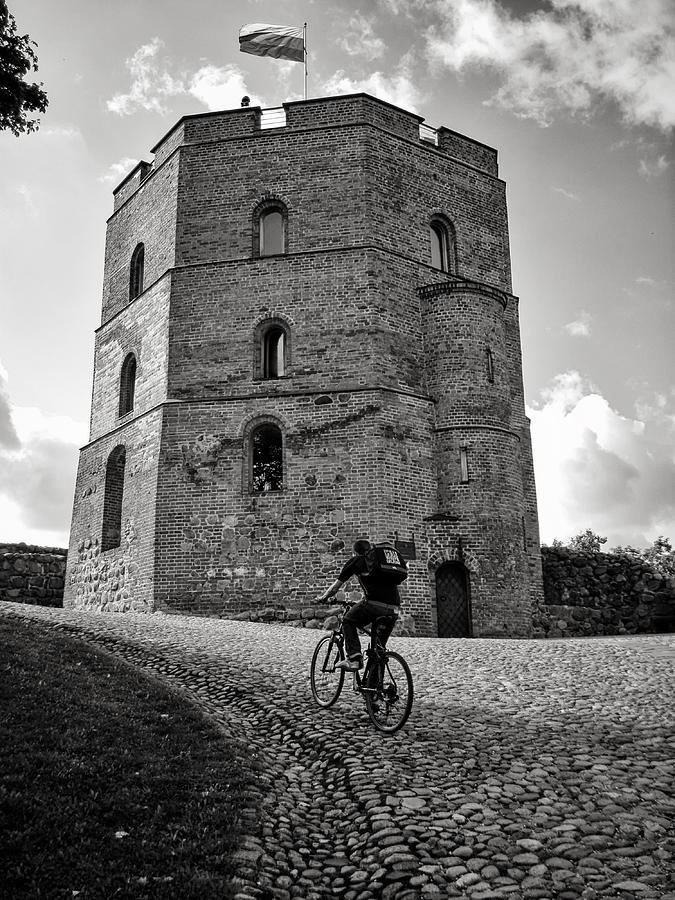 I was fortunate to climb the hill in Vilnius to the site of Gediminas' tower. On the way, I was passed by this modern day bicycler, who then rested on the wall at the base of the tower and enjoyed the scenery while sipping a bottle of water.

The history of the tower is important to Lithuanians, and I quote the following from Wikipedia: "Gediminas' Tower (Lithuanian: Gedimino pilies bokštas) is the remaining part of the Upper Castle in Vilnius, Lithuania.

The first fortifications were built of wood by the Grand Duke of Lithuania, Gediminas. Later the first brick castle was completed in 1409 by Grand Duke Vytautas. Third floor tower was rebuilt in 1930, by Polish architect Jan Borowski. Some remnants of the old castle have been restored, guided by archeological research.

It is possible to climb to the top of the hill on foot or by taking a funicular. The tower houses an exposition of archeologic findings from the hill and the surrounding areas. It is also an excellent vantage point, from where the panorama of Vilnius' Old Town can be admired.

Gediminas' Tower is an important state and historic symbol of the city of Vilnius and of Lithuania itself. It was depicted on the former national currency, the litas, and is mentioned in numerous Lithuanian patriotic poems and folk songs. The Flag of Lithuania was re-hoisted atop the tower on October 7, 1988, during the independence movement that was finalized by the Act of the Re-Establishment of the State of Lithuania on March 11, 1990."